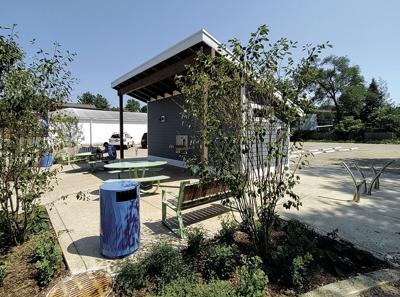 NEW BUFFALO — A new trailhead facility in downtown Union Pier has delivered additional off-street parking, public rest rooms and a place to sit down and relax.

During a July 15 New Buffalo Township Board meeting, Township Supervisor Michelle Heit said the rest rooms were open and the parking lot “very useable” since Burkholder Excavating had finished the gravel lot. By the time the Township Board met again on July 27, all of the parking space stops were in place and just a bit of landscaping and drainage work (including a garden that will serve as a thank-you to The Pokagon Fund) remained to be completed.

Heit said the trailhead is part of the Union Pier Streetscape Project (which received much of its funding from The Pokagon Fund). The project includes a pedestrian trail along Red Arrow Highway that is the start of a planned Linnear Park throughout Berrien County. Additional sections are planned over the next few years to the north and south of Union Pier. Heit said the ultimate goal is to connect all of the county parks.

“You’ll have to have trailheads every so often for that park,” she said.

Also on July 15, Marcy Hamilton of the Southwest Michigan Planning Commission gave the Township Board an update on the Michigan portion of the Marquette Greenway trail project, saying “I feel really good about where we are today.”

She said the township has received a USDA grant to pay for engineering. Abonmarche has done a topo survey and the geotechnical work, and got the data they needed to complete the design.

“It’s been a challenge. Since the road diet isn’t happening, we do need Amtrak land to do the trail, so that’s been taking a lot of everybody’s time.”

Hamilton said a contact in the real estate division at Amtrak has been very responsive and very helpful. She said an appraisal requested by Amtrak has been completed and engineering plans are nearly done.

Hamilton said Amtrak has put an emphasis on using the least amount of land possible for the trail (and keeping it as far from the tracks as possible with a fence); and minimizing any impact on drainage along the tracks (with plans by Abonmarche designed to improve the drainage). The easement needed is 14 feet wide in most places, rising to feet get in a few areas.

Another aspect of the plan is seeking to have requirements loosened when it comes to utility poles and guy-wires along the proposed Marquette Greenway route.

“We’ve submitted all the design plans to Amtrak … they have to go through, I guess like 12 departments to be signed off on.”

Hamilton said Cardno did a plant study along the trail corridor and some endangered plants were discovered along U.S. 12, adding “we’re probably going to have to move some plants.”

Hamilton said the project is doing well with the funding commitments from federal, state and local sources.

“We’ve got $3.6 million that is committed to the project. The total cost for the project is just over $4 million, and then we have the Amtrak easement which is kind of an unknown at this point,” she said.

Hamilton said the current schedule calls for securing the right-of-way and all of the local maps and submit the great inspection package so bids can go out in December, the bid is let in February, and construction can begin in March (from the Grand Beach Road entrance at U.S. 12 to the trailhead in the City of New Buffalo). She said the first portion of the Marquette Greenway in Michigan will be on Grand Beach Road until they get over the train tracks. Hamilton noted that is probably an optimistic timeline because it is unknown how long the review and Amtrak will take to complete.

She said the final budget submitted to the Michigan Department of Transportation (MDOT) was based on the three lane road diet, and some of the costs may have changed such as a fence on Amtrak property, the railroad’s flagging and inspection costs, and expenses related to power poles. She added that a request to MDOT for more funds is likely.

Hamilton said the Northwest Indiana Regional Planning Commission has applied for a more that $20 million U.S. Department of Transportation grant that would fund all of the Marquette Greenway gaps from Chicago to downtown New Buffalo.

“If that were to come through, we would be totally flush with funding,” she said, adding an answer on the request isn’t expected before December.

Later during the July 15 the Township Board accepted a $300,000 MDNR Grant for the Marquette Greenway project.

He said fireworks are believed to be the cause of a Fourth of July blaze that burned on a couple of lots in Grand Beach before firefighters put it out.

He also said people reporting overdose situations when a life is at stake are spared criminal prosecution under state laws.

While giving the monthly Pokagon Fund community report, Executive Director Dan Petersen acknowledged the work New Buffalo Township has done on its summer day camp “and what a gap it has filled in the community.”

He said The Pokagon Fund has had a Paycheck Protection loan forgiven (the Four Winds Casino was shut down for 2 1/2 months in 2020, leaving the fund without revenue for that period).

During its July 27 special meeting, the Township Board approved a temporary use permit to allow the Seeds Brewery to have food trucks on site at 16321 Red Arrow Highway in Union Pier.

Also on July 15, the Township Board appointed Patrick Donnelly and David Handley to the New Buffalo Recreational Authority.